Big Music for Small Cities has released a CD 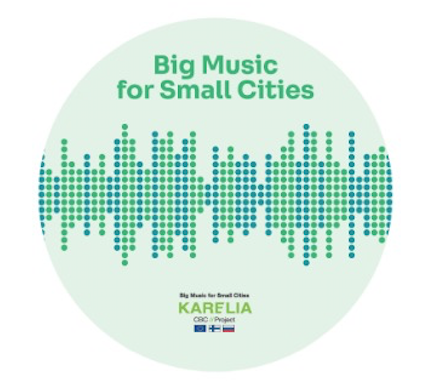 On September 23 at 16.00 a presentation of the CD in the framework of the Big Music for Small Cities project will take place in the Karelian State Philharmonic.

At the event, the organizers of the project will present the work on creation of the  music and the album, share their impressions of the musical program audio recording process with the Symphony Orchestra. And it will also be possible to know about the plans for the future. In addition, guests will receive a musical gift performed by the Philharmonic soloists.

Members of the Karelian Government, heads of the Representative Office of the Ministry of Foreign Affairs of Russia in Petrozavodsk, the Petrozavodsk branch of the Consulate General of Finland in St. Petersburg, regional ministries of culture and economy, Karelia CBC Programme`s Branch office director and the representatives of the Petrozavodsk district administration. Organizers of art festivals of the Republic of Karelia, journalists from regional media are invited to the presentation. At the event, it is planned to connect online colleagues from Joensuu who are implementing the Big Music for Small Cities project in Finland.

It should be said that the Big Music for Small Cities project, which was launched in February 2020, is eventful. It aims to combine resources in the field of culture, art and creative industries to develop an attractive cultural environment and create opportunities for small towns in the border region of the Republic of Karelia (Russia) - North Karelia (Finland) to become points of attraction.

A month after the launch of the project, a pandemic began, and along with this, strict quarantine measures imposed a long ban on mass events. The team had urgently to revise plans and search for alternative options for how to fulfill the tasks set at the start.

Looking ahead, we note that the project has successfully overcome objective difficulties. Thanks to cooperation within the creative sector in the Republic of Karelia, a filming venue appeared, which allowed the authors of the project to implement many initiatives in an online format.

The project managed to organize a discussion platform for art festivals on both sides of the border. Specialists of the creative field have been trained. As part of the Joensuu Winter Music Festival in 2021, concerts were held, which, thanks to broadcasts and video recordings, could be watched by thousands of audiences.

Let's list only the most striking events that became possible due to the project. The first Russian talk show "Light as Art" appeared with the participation of experts - international lighting designers. Composers from Russia and Finland have written symphonic music especially for the project. Professional recording equipment was purchased for working with large performing groups. A musical program was created, which, performed by the Symphony Orchestra of the Karelian State Philharmonic, compiled an album of the project Big Music for Small Cities.

The audio recording of the orchestra took place in June 2021. The sound recording equipment purchased under the project made it possible to carry out work within the Karelian Philharmonic. To implement the idea, an authoritative expert was invited - Pavel Timofeev, studio director, laureate of the International Prize "Pure Sound" in the nomination "For the best audio recording of a concert for a solo instrument with an orchestra - 2019".

In addition to the classics, the Hebrides overture by Felix Mendelssohn and the musical picture Night on Bald Mountain by Modest Mussorgsky, the album includes musical works commissioned specially for the project: the three-part KARELIA SUITE by Ilya Kuznetsov, Pavel Karmanov and Alexey Kurbatov and Nixus by Cecilia Damström

The disc will be replicated in the amount of 300 copies and distributed among the participants of the project's partner network in the border region.

Note that the presentation of the disc "Big Music for Small Towns" is taking place within the framework of celebration of the European Cooperation Day of the Karelia CBC Program.

Entry to the event is by invitation only. The contact number of the project coordinator from the Russian side for the media: 8-931-700-23-35.

In order to comply with the anti-COVID measures, the organizers ensure the established safety rules.