Federal experts visited the Museum of fine arts of Karelia 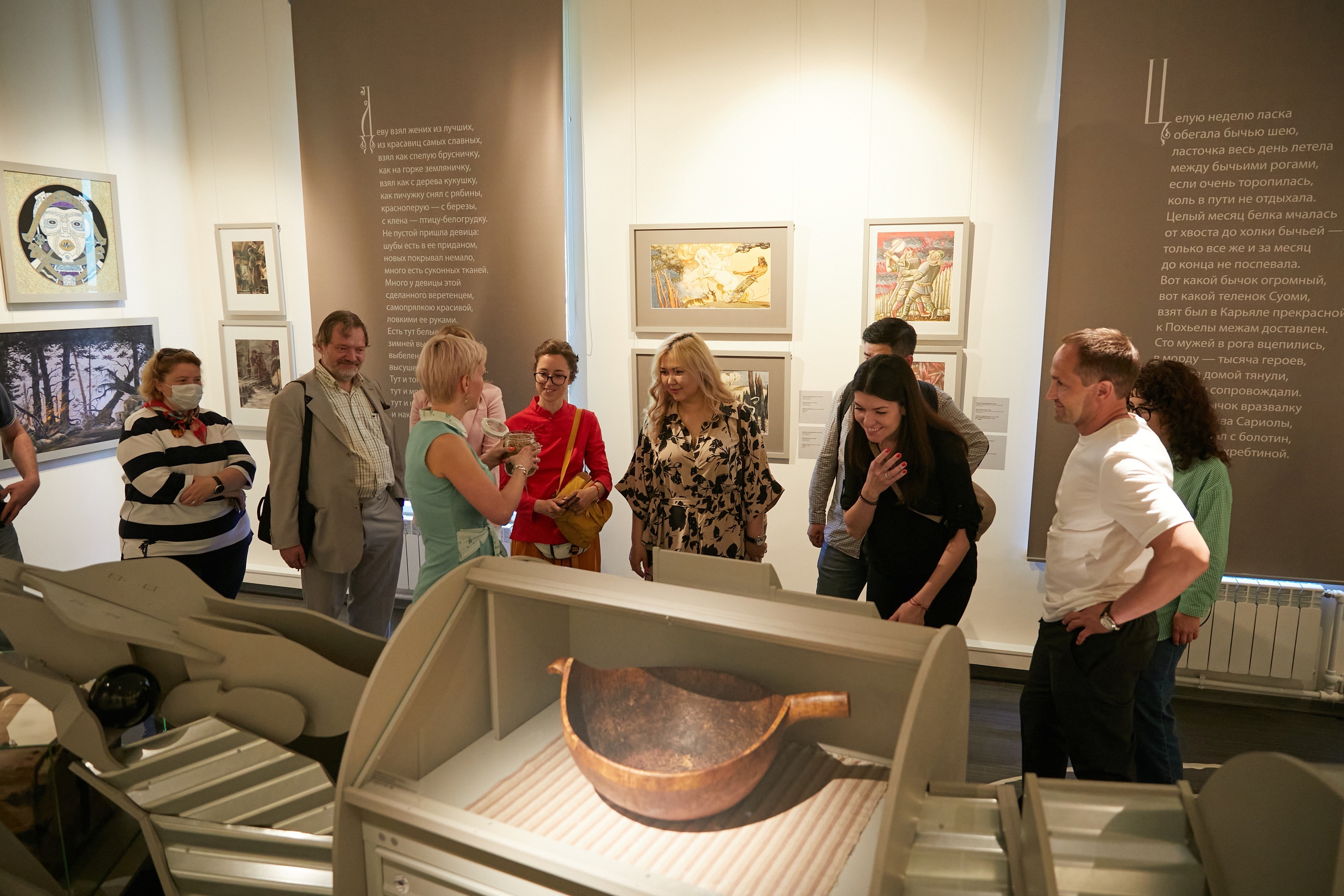 For the previous year the Museum of Fine Arts of the Republic of Karelia modernized the entrance area, created the new navigation system and audio-guide in Russian, English and Chinese, opened a new section of the permanent exhibition dedicated to the world famous epic poem "Kalevala" - a visiting card of Karelia.

In June 2021, the museum invited a group of federal experts to demonstrate and test the new museum products and services created under the project “Museums in Focus”, implemented under the Karelia cross-border cooperation program (CBC Karelia).

Leading Chinese experts, representatives of the tourism and museum sectors spent the whole day in the museum studying the innovations. Natalia Vavilova, Director of the museum, opened the meeting with a welcoming speech. She spoke about the Museum of Fine Arts of Karelia as one of the leading cultural centers in the region.

Natalya Kozlovskaya, Head of the Development Department, told her colleagues about the museum expositions, the sensory room, the new navigation system and the modernized entrance area, about the elements that had been improved and created for a comfortable visit for guests and etc.

The guests took part in the demonstration of medieval costumes, which had been sewn for the exposition "Kalevala Universe", some even tried them on and took a selfie.

Tatiana Saltykova, Project Manager of the "Museums in Focus" presented to the experts all the stages of the project, where photographs and figures vividly reflected the huge amount of work that the museum had managed to accomplish over the past year.

Mrs. Gong Jiajia, Minister-Counselor for Culture of China Embassy in the Russian Federation, Director of the Chinese Cultural Center in Moscow greeted the guests of the expert in video format.

During the final discussion, experts gave their feedback and recommendations on new products and services created in the museum and talked about promotion opportunities, both in the domestic and international markets.

Some feedback from colleagues in accounts in social networks:

"You can't imagine how much effort and love these people put into their project! It's not just work - it's love. The whole museum team is so passionate about this idea - to preserve the Karelian epic poem, to present it deliciously, beautifully, in a new way, that you are unwittingly charged with this passion! " Maria Bydantseva, founder of the federal network of Chinese language schools Panda School, blogger

"For me, the creation of an integral interesting exposition based on an art collection (especially flat exhibits) always seems to be an overwhelmingly difficult task. The “Kalevala Universe” in the Museum of Fine Arts of Karelia is one of the most beautiful and effective solutions to such a problem. It is a great example of how one can compose a whole storytelling about Kalevala in the museum halls from graphics and paintings with the inclusion of thematic installations (each of which is an independent work of art)! " Anton Lagutin, Deputy Head of the Department for the Development of Museum Activities, Moscow State Budgetary Institution of Culture "Moscow Directorate for the Development of Cultural Centers"

" I was delighted with the unique exposition dedicated to the Karelian-Finnish epic poem “Kalevala", and, of course, with the communication with the director of the museum, Natalia Ivanovna Vavilova" Demyan Smilevets, Rostourism, Head of International Cooperation Department The possibilities of promoting the project in the Chinese segment of the Internet space were discussed with Asel Smolyar, CEO of Smolyar Consulting International, and Olga Bolkunova, founder and CEO of China Insiders.

Promotion in Chinese social networks, on tourism platforms, using QR-codes, working with bloggers, providing an opportunity to listen to an audio guide from a cloud service - these are the possibilities that can be implemented and tested today. Svetlana Gonetskaya, Deputy Director for Government Relations (GR) and Communications, TUI Russia and the CIS, noted that the Museum of Fine Arts of Karelia is brightly represented in the Russian-language Internet and social networks segment, all its news about the implementation of projects and the appearance of new exhibitions are always represented in details in digital platforms.

The meeting was also attended by Chinese students of the Conservatory living in Petrozavodsk. Recently, they got acquainted with the new section of the permanent exhibition "Kalevala Universe", read annotations and explications in Chinese. At the meeting with experts, the students were pleased to hear their native language. This time, the students tested a new service - an audio guide “Kalevala Universe" in Chinese. The focus group rated the quality of the translation and the sound of the language as "excellent", which was important for the project team, since it is almost impossible to check this content without the inhabitants of the Celestial Empire.

During the meeting Anna Bessmertnaya, Chairperson of the Commission for Cooperation with Partners from China of the Moscow Chamber of Commerce and Industry, presented the museum with a valuable gift. It was a painting with a Chinese hieroglyphs denoting all types of plucked musical instruments, which the national Karelian instrument - the kantele - also belongs to.

The picture was created by Mr. Kong Lingming, a 76th generation descendant of Confucius. He is currently Vice President of the World Confucius Association, Vice President of the Eastern Confucian Academy of Culture in Qufu, Deputy Dean of the Eastern Confucian Academy of Calligraphy and Painting, and lecturer on Chinese calligraphy at the Moscow World Museum of Calligraphy. It is an honor that the museum received such a wonderful meaningful gift from colleagues!

It was important for the project team and for the Museum to get the opinion of colleagues from different fields, so everyone's feedback was of great value.

The museum expresses its gratitude to Mrs. Gong Jiajia and all the experts for the visit and feedback, as well as to students and teachers of the Petrozavodsk State Conservatory.