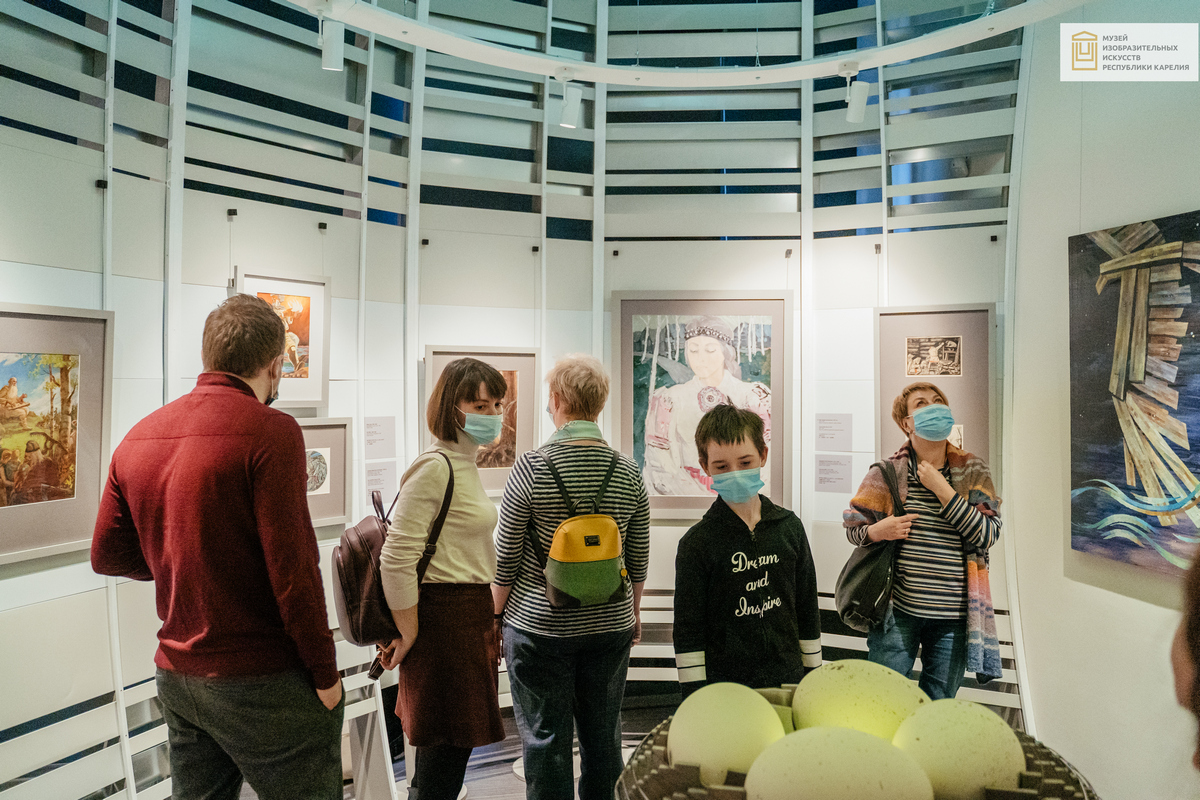 On February 28, 2021, on the International Day of Kalevala, a new section of the permanent exhibition "Kalevala Universe" was opened in the Museum of Fine Arts of the Republic of Karelia.

The creation of the exhibition became possible thanks to the project "Museums in Focus: the Development of Cultural Services for Chinese Tourists" (KA9021) under the Karelia CBC Programme.

Natalya Vavilova, director of the Museum of Fine Arts of Karelia, met the guests with the welcoming speech and thanked everyone who took part in the creation of the exhibition. Tatyana Saltykova, the manager of the project, told how the work on the creation of the exhibition had been going on, and the exhibition designer, Anastasia Dubrovskaya, shared her impressions of the work done and thanked the project team for cooperation, support and understanding. Lyudmila Nikiforova, the curator of the project, spoke about the choice of works for the new exhibition. Larisa Podsadnik, Deputy Prime Minister of the Government of the Republic of Karelia, and Sergey Solovyov, Deputy Minister of Culture of the Republic of Karelia came to congratulate the Museum.

Before the pandemic it was planned to invite the Finnish partners and colleagues to the opening ceremony: the Museums of Joensuu. Unfortunately due to restriction measures it bacame impossible. Nevertheless, our partners - Tarja Raninen-Siiskonen, director of the Museums of Joensuu, and Paulina Kaasalainen, chief curator of the Joensuu Art Museum - sent a welcoming address, which was read by Natalia Vavilova. The Finnish colleagues noted that Kalevala had a great cultural importance for both Finland and Russia and was a strong link between our regions.

The team of the project "Museums in Focus" expressed gratitude to the colleagues from Kantele-GO project for the performance of the work "Runa" (by Irina Shishkanova) on a kantele during the opening ceremony. The composition was performed by Elena Ankhimova, a performer of the National Song and Dance Ensemble of Karelia "Kantele".

The new "Kalevala" section of the Museum exposition was created with the use of modern materials and equipment, which made it possible to realize all the designers' ideas. The creators of the exposition managed to read and reflect in a completely new way the eternal themes that filled the Kalevala epic poem. At the exhibition, a guest will have a real immersive journey along the path to the singing forest full of kantele sounds, will see the birth of the world and getacquainted with the heroes of Kalevala. The unusual installation "Pike" will reveal the secrets of old life, share a recipe for brewing and allow to breathe in the aromas of Kalevala. The waters of Tuonela River will slowly carry guests outside the familiar world! And, of course, “Kalevala” is unthinkable without the Sampo mill, which will appear to the guests at the final point of the journey!