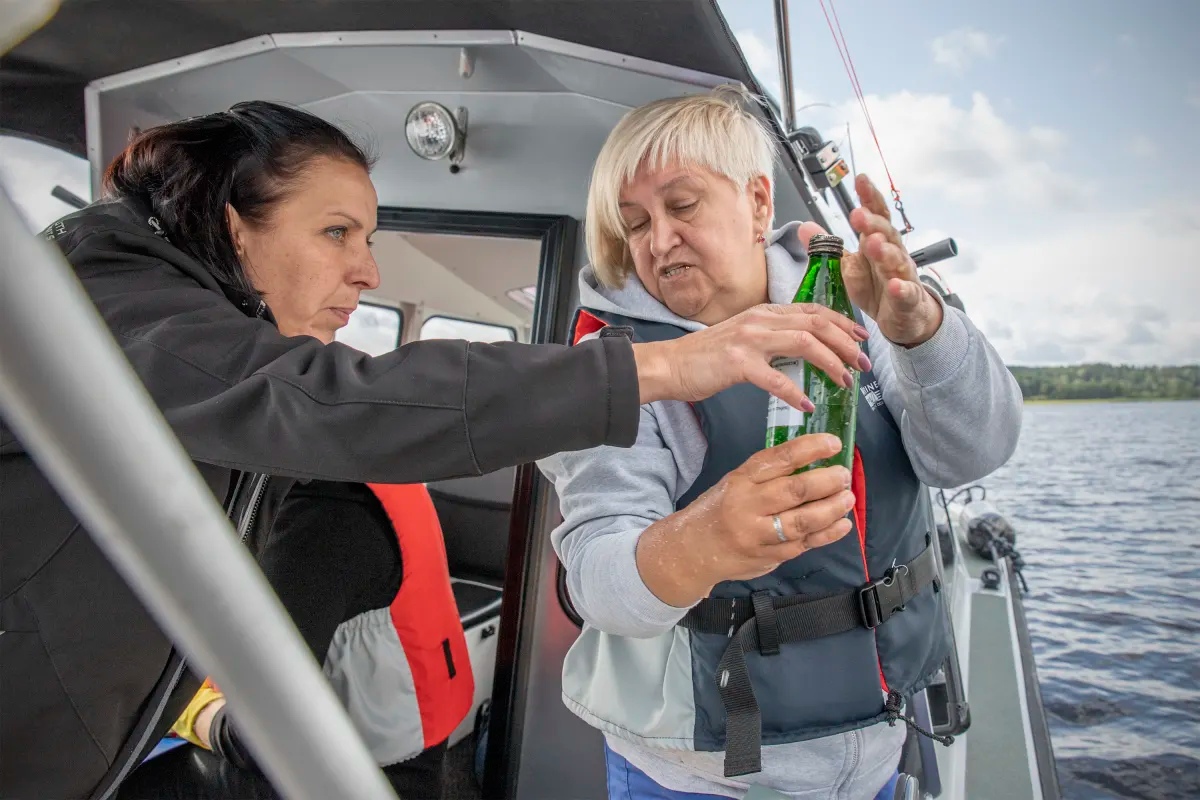 As previously reported in August 2019 representatives of project partner SYKE came to Sortavala to conduct water sampling together with the lead partner Karelvodokanal. The goal of sampling was to record the quality of water before any renovation and construction activities in the framework of project KA6000 took place. Here are the findings of SYKE environmental experts.

Quality of tap water in town of Sortavala

Currently, town of Sortavala takes its usage water from Soikkasenlahti Bay, which locates few kilometres away from the centre of Sortavala. During summer, one can observe unpleasant smell in the lake water. The smell originates mainly from untreated wastewaters, which are carried to Soikkasenlahti Bay by River Tohmajoki from village of Helylä.

There is a waste water treatment plant (WWTP) in Helylä. The WWTP was constructed in 1976 and it is obsolete now. In addition, capacity of the WWTP is insufficient for the volume of the discharged wastewater. As the result, untreated wastewaters are released to River Tohmajoki daily, which deteriorates water quality in Soikkasenlahti bay and decreases quality of tap water in Sortavala. In the aspect of human health, the most significant consequence of the wastewater discharges is increased level of coliform bacteria in natural water at Soikkasenlahti Bay. Because of this, the raw water taken from Soikkasenlahti Bay must be heavily chlorinated to kill the bacteria before the tap water is distributed to town of Sortavala. It is also possible that the water pipe system used in Sortavala may decrease tap water quality because of its partly old age.

Heavy chlorination affects strongly taste and odour of the tap water in town of Sortavala. Observed iron levels in tap water and natural water at Soikkasenlahti Bay were high enough, that they may also affect the taste of tap water in Sortavala. Trihalomethanes like chloroform are formed as side products of chlorination. Consumers may be exposed to chloroform via drinking water, absorption through skin and via airways, since chloroform is volatile.

In summary, the tap water can be used for showering and washing teeth without significant health risks in Sortavala. The tap water is drinkable but observed iron levels in the water are high enough that drinking tap water may irritate stomach of people who are not used to it, e.g. tourists. As stated before, the pipe system may also affect tap water quality in Sortavala.

Lake Läppäjärvi is a water area part of Lake Ladoga in north-west part of the lake. The most notable settlement in its vicinity is the town of Sortavala. Lake Läppäjärvi is heavily affected by discharges of untreated wastewaters from two waste water outlets, which are located at Läppäjärvi Bay. Especially during warm summer, one can observe smell of wastewater in the bay area. Locals are known to fish nearby the waste water outlets. This is not recommendable, since consumption of the fish caught in Läppäjärvi Bay may cause health risks because of the contaminants carried by untreated wastewaters to the lake. Especially because daily volume of wastewater discharge is around 920 cubic metres in Läppäjärvi Bay. It is quite possible that the fish living in the lake have accumulated contaminants in their body, which are then transferred to humans via fish consumption. Children may be more prone to health risks caused by contaminants than adults, because the protective mechanisms of their systems are still developing.

Swimming in nearby area of Läppäjärvi Bay may also result in health risks because of smell of faeces in the bay area. The smell of wastewater usually indicates presence of coliform bacteria in the water, which may cause e.g. diarrhea for humans. When taking volume of wastewater discharge of 920 cubic metres per day into account, swimming in Läppäjärvi Bay and the areas nearby is not recommendable because of health risks caused by microbes.