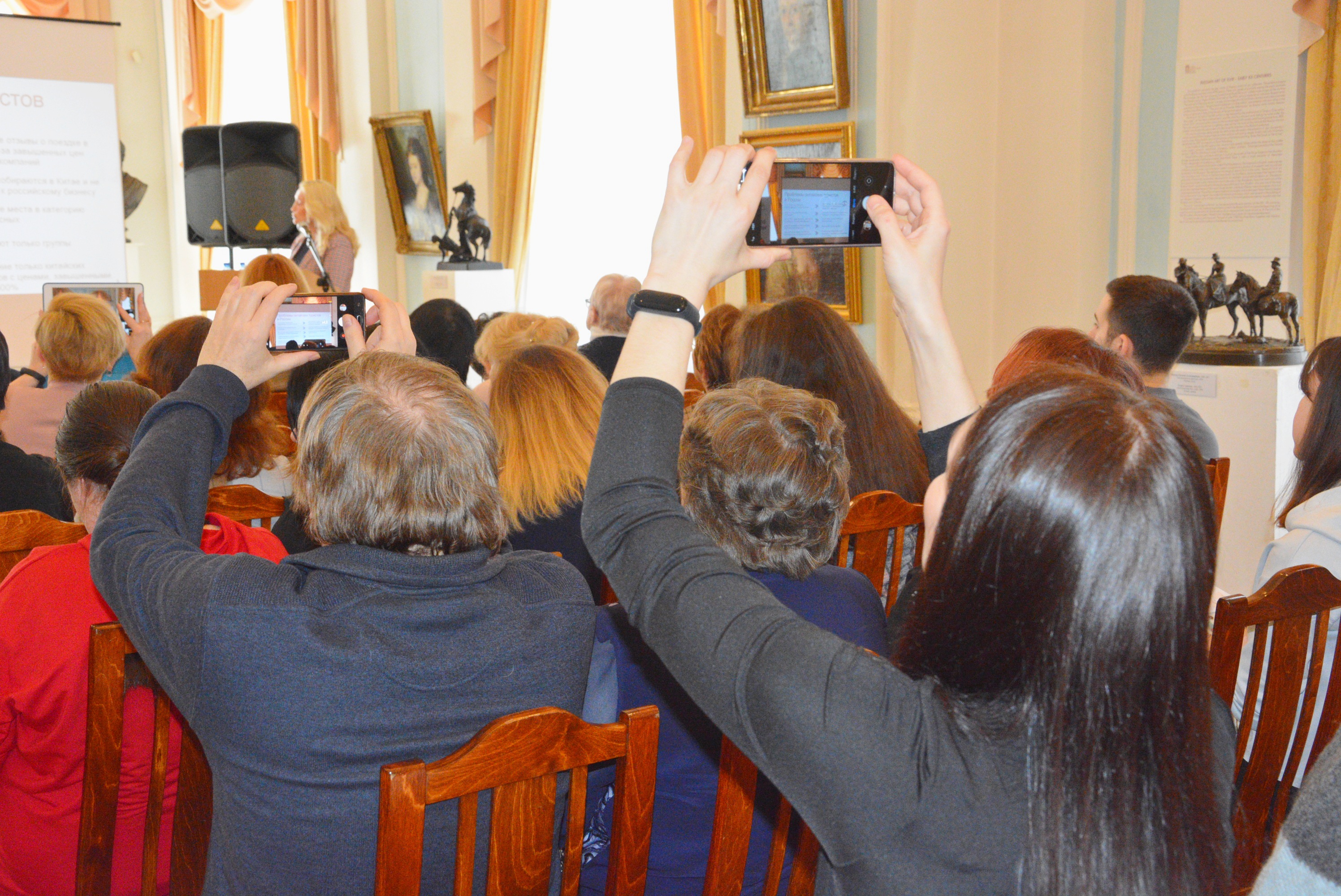 Two months of preparation were spent on the search for experts and organizational work to start the project "Museums in Focus: development of cultural services for Chinese tourists" within the Karelia CBC Programme. IThe first public project event is the seminar "Cultural Tourism and the Best Practices of Leading Museums in Developing Tourist Products for Chinese Travelers". More than 70 guests participated in the start seminar. Among them were museum professionals from Petrozavodsk, Kostomuksha, Medvezhyegorsk, Kondopoga, Sortavala, Olonets, Kem and some other regions of Karelia, colleagues from North Karelia (Finland), representatives of the authorities involved in the development of culture and tourism in Karelia, colleagues from travel companies, mass media and other organizations. High interest in the topic of Сhinese tourism development, as well as the opportunity to meet personally the leading experts, confirm the great timeliness of the project.

The seminar was opened by the Director of the Museum of Fine Arts of Karelia - Natalia Vavilova, who emphasized the importance of a long-term partnership with Finnish partners. She noted that for the first time the museum appeared in the project of cross-border cooperation as a leading partner and it implied a great responsibility for the project realization.

Consul Johannes Puukki from Petrozavodsk Office of the Consulate General of Finland in his welcoming speech said that our territories had a lot in common: our nature, culture, and hospitality. And our similarities and common values are a strong base for our cooperation, development of long-term effective projects and communications.

Dmitry Bazegsky, the Head of Petrozavodsk Branch Office of Karelia CBC Programme, said that for many years of the program existence the problem of Chinese tourism was raised for the first time, therefore it was of great interest and importance for the Managing authority of the Karelia CBC Programme to see the first results.

Then the project manager Tatyana Saltykova  presented the project major directions and future plans and also introduced to the participants the project designer from St. Petersburg - Anastasia Dubrovskaya, who will work on the development of a design project for a new section of the Museum’s permanent exhibition dedicated to the Karelian-Finnish epic "Kalevala."

The key speakers of the seminar were leading Chinese experts, who managed to come despite their busy schedule. They "draw" a portrait of a Chinese tourist, talked about the specifics of receiving visitors from China, emphasized the steps that need to be taken to become "visible" in the Chinese tourism market. Anna Sibirkina, Deputy Executive Director of the World Without Borders Travel Association, Head of the China Friendly Program (Moscow), spoke about the place of Karelia in China’s Internet space. Anna prepared a detailed analysis of the monitoring of Chinese social media (WeChat, Weibo), tourist and information portals (Ctrip, Mafengwo, Tuniu, where the references to Karelia are very chaotic, and there are practically no infrastructure facilities. For the last 10 years the Chinese tourists' flow to Russia has been regularly increasing. The China Friendly program was launched in Russia in 2015 to help Russian companies and organizations to build relations with a Chinese tourist. Today, it is a voluntary certification that allows the facility to be more accessible and understandable to Chinese tourists. Anna Bessmertnaya, director of humanitarian cooperation programs in Russia China Analytical Center (Moscow) talked about how to develop cultural services to attract Chinese tourists' flow. Her report “Chinese Tourist - Understand Me If You Can” had a number of practical cases and tools that can be used to promote not only a specific tourist site, but also the whole region. In her opinion, China today shows the fastest digitalization of all processes, so this feature cannot be ignored. Anna also proposed some the so-called China Travel Solutuions on the WeChat platform on the example of the Museum of Fine Arts of Karelia.

The insightful and in-depth report of the Finnish expert, Irene Wai Lwin Moe, Ph.D., was focused on how to find and use similarityies in our cultures in order to build understandable and useful communication. Irene is an art historian and cultural anthropologist, who has been engaged in researches in the field of philosophy, mythology of art and religion for many years. Possessing extensive experience and knowledge in the field of Chinese, Japanese and Finnish art and folklore, she regularly participates in intercultural development projects. Irene shared ideas on how we could represent the Karelian culture to Chinese tourists in a format that they could easily understand.

It's no secret that the main cities of Russia - Moscow and Saint-Petersburg - are one of the most popular destinations for Chinese tourists. Museums are known to be the main attractions for the travelers from China, so the capitals' museums have already gained a lot of experience in working with Chinese guests. That is why it was very important to invite their specialists to participate in the seminar.  The experience of the Peterhof Museum was presented by an expert from the northern capital of Russia, Roman Kovrikov, Deputy General Director for Cultural and Educational Work of the Peterhof Museum Reserve (St. Petersburg). In 2019, Peterhof was visited by more than 6 million people, 300 thousand of whom were from Chinf, so the museum had to build cooperation with tour operators, to provide the necessary sanitary requirements in the park, as well as to improve the system of audio guides and the work of administrators. Nikita Semenov, a leading promotion specialist of educational projects of the State Historical Museum (Moscow) told about certification aspects. He noted that it was important for the museum located on Red Square to pay attention not to attracting tourists, but to adaptation of space to various requests. Over 200 thousand Chinese visited the museum in 2019 year, so the museum developed for them a convenient navigation system, an adapted tour and a site branch in Chinese.

In conclusion we can note that it is important not only to create services and products for tourists, but informational promotion of the created products and services also plays a very important role. The seminar became a real platform for communication and establishing contacts between specialists from various fields, the opportunity to learn more about Chinese tourists and get acquainted with the best practices of the leading museums that have already created a China-friendly environment.

It is pleasant that the experts and participants noted the usefulness of the seminar, as well as the high level of organization.