On Friday 17th of May Russian participants of the seminar on theatre technologies arrived in Joensuu with interpreter Evgenia Arekhovskaya. First, they visited local summer theatre, Teatteri-Traktori, in Sinkkola neighborhood in Joensuu. Creatively constructed open air arena with swimming pool under the stage behind an old farmhouse fascinated immediately. Like a big family, these enthusiastic young artists both construct the stage and perform in spectacles. Then group had an excursion in the beautiful and historic building of Theatre of Joensuu. Big amount of technologies and their good order in the stage impressed Russian technicians. In the evening we had a chance to see the spectacle “Niin kuin taivaassa” on the main stage.

On Saturday 18th of May seminar on theatre techniques started. Six Russian and six Finnish technicians gathered in Riveria’s training center in Outokumpu. Theme of the weekend was basics of light design. Expert of the education was light designer Jyrki Sinisalo from Helsinki, Metropolia University of Applied Sciences. During the day we learned about the process of light design and about elements that it is made of: color, direction, form, intensity, rhythm, and movement. It was interesting to notice how colors effect on design. Even if we spoke different languages, the language of theatre is common, semiotics.

Second day of the seminar continued with lecturer Jyrki Sinisalo. How to find ideas for light design? Jyrki advices technicians to visit art museums, because paintings include excellent ideas about usage of light. Masterpieces of our art history have saved in memories of audience, so it’s good to use these compositions on the stage. For example, famous Finnish film director Aki Kaurismäki uses a lot of art references in his films. In the afternoon seminar continued with creating a demo for an act and discussion about LED lighting.

Third day of the seminar concentrated on use of video in theatres. Lecturer was video and sound designer Severi Haapala, who works in Metropolia University of Applied Sciences and as a freelancer in Helsinki. First, he presented some technical terms and equipment of the field. Then, though his own examples and cases he talked about interactivity in live performance. Interestingly, with a small budget he had created unique videos for spectacle projecting images on the washing machine and sheets, for example. In the afternoon participants had an active workshop where they could test these tools of video design and image transfer in practice (Resume Arena, Mind Mapper, QLab and Hippotizer).

Fourth day of the seminar on Tuesday 21th of May continued with Severi Haapala. Theme of the day was sound design and the use of sound in performance. First, we went through mechanics of sound systems and learned, how strongly sound effects on performance. Sound can be music, actor’s voice, functional effect, emotional mood etc. Severi presented several examples and cases of his own production. For example, in the spectacle called Vomma he was both an actor on the stage and technician who created all sounds and lights for the performance from mobile phone! On the second part of the day participants could practise interactive sound design with Ableton Live, Mad Mapper, Resolume Arena, QLab and Hippotizer programmes.

Last day of the seminar on May 22 took place in Joensuu, in Peltola campus of Riveria. Internationally successful lighting and set designer Mikki Kunttu (Montreal) told interestingly about his career as a designer. What designer does is visualizing things before they are done on the stage. For designers usually the most difficult task is to verbalize and visualize his/her own ideas. In this creative work designer’s personal history, values and social networks play important role, skills are only one part of it. Also, coincidence play usually significant role. Designer should see things from many points of view, for example from producer’s aspect. Mikki things that usually his most difficult projects have become most successful. An important reference in his career was Swan Lake for Royal Danish Ballet (2015) which opened him many new opportunities. As an interesting case study, he represented us his latest project with Cirque du Soleil. He created light design for Alegria, which premiere was on April 2019. In the end, Kunttu showed us many programs that he used in his work (e.g. Cinema 4D). 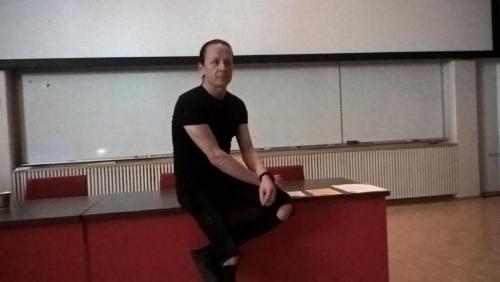 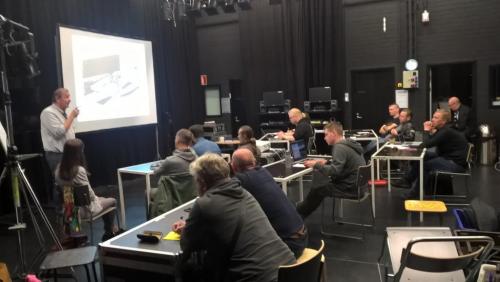